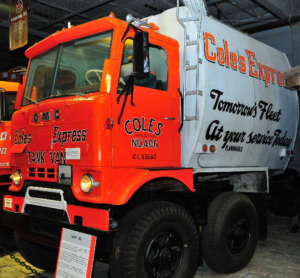 This week’s “Museum Feature of the Week”, the Tank Van! This unit was the last of four of these tank-vans manufactured and used specifically for Coles Express. Each of the four tractors were identical. The first unit (#400) was equipped with a steel tank made by J. J. Bulter of Bangor, to the specifications laid out by Galen Cole. The steel tank held 3900 gallons of gasoline, kerosene, or heating oil (diesel). The tank was built nearly square and though it was the largest tank of the four, because of is smooth sides from time to time, tiny leaks developed in the welds as the tanks steel frame could not handle the strain of highway travel, rough roads, etc., that it encountered. These units operated before I-95 extended north of Old Town. The steel tank, however, did remain in service for four years. The steel tank was heavy, approximately 6,000lbs. 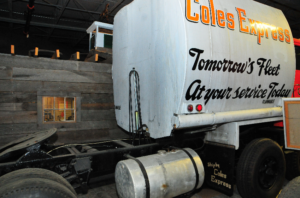 Coles Express had been in touch with Tech Weld of Burlington, Massachusetts, a specialty tank company when the project first started, but they indicated a tank of this type was not feasible. After the first steel tank was built and ran the winter of 1962, Tech Weld agreed and contracted to build an aluminum tank of 3200-gallon capacity. The three aluminum tanks performed without difficulty for about 5 years. These tanks, during the winter months, ran two trips a day from Bangor to Presque Isle and Caribou hauling primarily heating oil from Penobscot County River terminals at Bangor and Brewer. Their gross northbound weight with oil totaled about 60,000lbs with legal limits then set at 72,000lbs, it was possible to handle freight up to 12,000lbs in the trailer, which was often done. A limiting factor was the tandem front steering unit which, though equipped with oversized tires (1200×20’s) under the Hendrickson tandem front steering unit, the front tandem’s legal maximum capacity was 32,000lbs.

These units and the Tank-Van concept was the dream and design of Galen Cole. The idea came about because of Coles Express imbalance of loads to and from Aroostook County during certain times of the year. Initially there was some question of safety and dependability.

History proved that not one of these units was ever in an accident on or off the highway (they had the most positive front steering of any truck on the road) and even though a few front tires blew, the three remaining inflated tires easily controlled the unit. Previously, in the winter Coles tank trailers ran empty southbound while at the same time freight trailers ran empty northbound to haul potatoes south. The tank van allowed a load to be hauled in both directions and up to 50 loads a week of oil north and 50 loads of potatoes moved south on these four units working around the clock.

In 1967, the State of Maine and the federal government started allowing longer 45 foot trailers to be hauled as long as the overall length of the unit did not exceed 60 feet. This meant that Coles trailers would continue to be restricted to 40 feet or the tank-vans would have to be replaced. Coles at that time operated about 100 trailers and replaced those units at about 10% a year. With but three tank vans then running, as #400 had been replaced earlier, the decision was not difficult in that 5 additional feet of freight could be hauled on the entire fleet of trailers and the demand for tank-vans was becoming limited.

The #406 Tank-Van was the last to be taken out of service in 1970 and had run about a half million miles and was sold to a used oil hauler who used it for several years spraying camp roads, etc. The tractor was repurchased in the summer of 1989 from Donald Millington, of Millington Enterprises Inc. who was the original purchaser of the unit. It had been stored in his back field in Lincolnville Center for some years. Mr. Millington drove the tractor to Bangor where the dents were removed and it was restored. Previously, one of the tanks from another tank-van had been retained and that tank unit was in storage and available to be installed on #406.