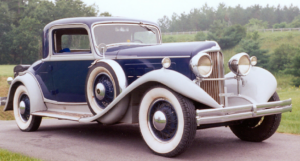 This week’s “Museum Feature of the Week”, is a Reo Royal Coupe. The car is one of only 172 that were built in 1931 and knowledgeable researchers believe only 12 remain (as of 2012). It is described as a Reo Royale Model 8-35, two-passenger Sports Coupe with room for two more in the rumble seat. Its engine has eight cylinders inline; its upholstery is leather and the brakes are hydraulic; it cruises nicely at 60 MPH. Allie Cole, father of Galen Cole our founder, owned  one identical to this one when Galen was a child. 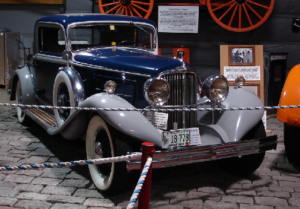 At the height of the Great Depression, it is not likely that Allie would have spent the kind of money required to own this car, but an explanation may be found in “Allie Cole, A Maine Pioneer” pp. 67-68 (Galen’s book about his father). He writes of this acquisition: “He had a beat up old REO coupe for traveling over the lines and because business was so bad he felt he could get more tonnage from shippers if he presented an appearance that indicated a real need which of course was true. This did not work out and he was prompted to get a nearly new modern vehicle just like he was successful and try this approach. In doing this he experienced a favorable turn around.” 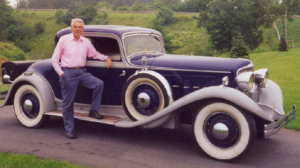 Galen remembered back to the young age of only seven, riding in this beautiful, powerful, luxurious car with his dad. In 1998, this Museum acquired this car identical to his dad’s coupe. When Galen drove it around parts of Maine he stated that “It helped me go back more than 60 years to those rides with my father, who was the most special man in my life.”