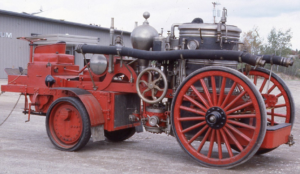 This week’s “Museum Feature of the Week”, the Amoskeag Steam Pumper! Manufactured for the International Power Company using an Amoskeag steam engine, it was purchased by the Portland Fire Department in 1908 and assigned the name Engine No. 4. It is a 1st-size Amoskeag. It was among the largest of those owned by Portland capable of pumping 750 gallons per minute and weighs 8,000 pounds. 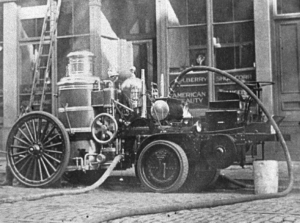 Originally three horses pulled the steamer side by side. Their speed, stamina and appearance were more important than strength. The showmanship of three matched horses dashing out of the firehouse pulling the polished steamer at full speed was impressive and good public relations. The machine’s weight would cause the horses to stop and catch their breath every couple miles at least – not desirable on the way to a fire – so they were replaced by a Christie front wheel drive power unit in 1924. The tractor has only one axle and it is the driving axle. The steamer is displayed with that tractor attached. 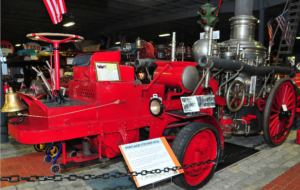 Hot water was pumped through the engine continuously as it sat in the engine house. Horses were kept in place at the ready and only needed to be hitched to the engine when collars and harnesses dropped from the ceiling. Kindling was laid in the fire box and ignited as the horses were hitched. Cannel coal was the chief fuel as it ignited easily and burned with a hot flame, “Cannel” is the Welsh word for candle – the coal burned with small flames resembling candle flames. Portland Fire Dept. placed this pumper on reserve in 1929 where it remained until purchased by Cameron Bradley in 1946. 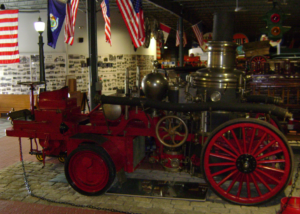 Cameron Bradley was living in West Gouldsboro, Maine, when he learned of Galen’s plan for a museum. Cameron promptly offered to donate his 1908 steam pumper if Galen would arrange to transport a few other vehicles from Cameron’s Wolfpen Automotive Museum in West Southborough, Massachusetts to his residence in Maine. Upon learning that the pumper was in excellent condition and that its working life was spent in Portland, Maine, arrangements were promptly completed for its donation in 1989.