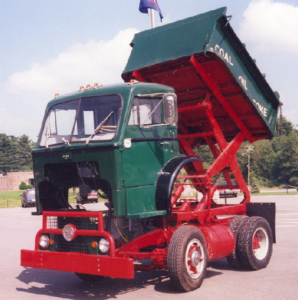 This week’s “Museum Feature of the Week”, the Mack Coal Delivery Truck! Mack manufactured only 800 of this particular model. It has a six-cylinder, gasoline engine with a five-speed transmission. Early in its life it was converted from a freight tractor to a coal delivery truck The cab is lifted squarely upward (not tilted on front hinges) by hydraulics powered by a 12V motor. Its bed can be raised by hydraulic “scissor action” to enable the coal to flow out of the body down the chute from the truck parked on the street through the basement window and into the coal bin. If the bin was unreachable by the chute, the coal had to be carried in a canvas bag over the driver’s shoulders. 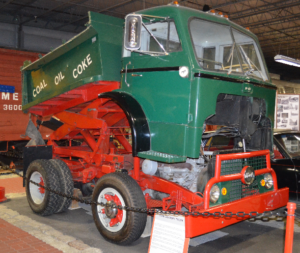 This Mack D42 C.O.E. was first owned by St. Johnsbury Trucking Company of St. Johnsbury, Vermont. It was used as a city tractor because with its 96″ wheel base hitched to a small trailer, it was very maneuverable in the tight places found in cities. It was then converted to a coal delivery truck and operated by M. R. LaPearle & Sons of Exeter, New Hampshire. It was then sold after restoration to Mel Clark of Hampton, New 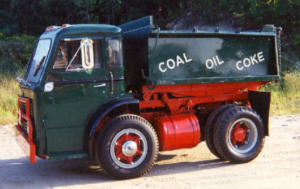 Hampshire, who intended to resell it. George Sprowl of Sprowl Building Components, Inc. of Searsmont, Maine, purchased it in 1993 and finished its restoration. He sold it at an Owls Head Transportation Museum auction to Selden Von Herten of Collectors Carousel in Westbrook, Maine, who donated it to the Museum.