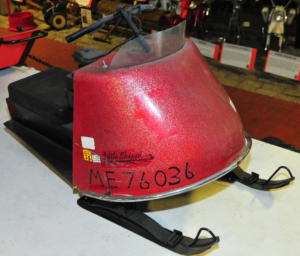 This week’s “Museum Feature of the Week”, is the “Little Skipper”. For several years, an empty space in the snowmobile section displayed a sign informing Museum visitors of its need for a child’s snowmobile. In 1997, having read the sign, Blair and Mary Ellen Frost donated their 1968 “Little Skipper”. It was manufactured by LORI Engineering Corp., Southington, Connecticut, (also known as Lori Lock Corporation) and purchased by the Frosts from a dealer in Canaan, Maine. Their children rode it on Maine trails until the mid-1970s, but its last trip was in 1994.

It has a five-horsepower single cylinder, four-cycle Briggs & Stratton engine. Its rubber track is 10 inches wide and 58 inches long suspended on bogie wheels. On hard-packed trails it could reach 25 MPH. The sled is four feet long, two feet wide and weights 102 lbs. Its retail cost in 1968 was $295.