A piece of the Berlin Wall! This piece was obtained by our founder, Galen Cole, in 1992. Note the graffiti on one side, this would have been the western side of the wall which was covered in graffiti, while the eastern side remained blank. Today pieces of the wall stand as a reminder that, “Freedom is invincible at the end. No wall can permanently withstand the desire for freedom.” -President of Germany Christian Wulff (2010-2012) 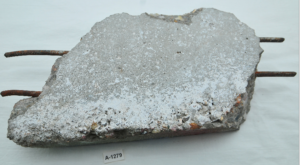 The Berlin wall, constructed in 1961 divided East and West Germany. This wall was the physical representation of the “Iron Curtain” that separated the two sides ideologically. After years of protests against this restraint on the freedom of movement between the two sides, the wall was demolished over the course of five years. Larger pieces of the wall were given to museums, political figures and other institutions as a reminder of the importance of freedom.