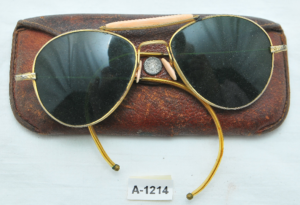 This week’s “Museum Feature of the Week”, is a pair of WWII Aviator Glasses. These glasses, made by Bausch & Lomb were used by the United States Army Air Force and United States Navy. They are on display in our WWII military case along with their original leather case. Aviators, also referred to as, “pilot’s glasses” became popular during WWII, the first pair developed by Bausch and Lomb in 1936.

This style on aviator sunglasses was later trademarked as “Ray Bans”. There popularity continued to grow as the public recognized them as General Douglas MacArthur’s preferred eyewear. 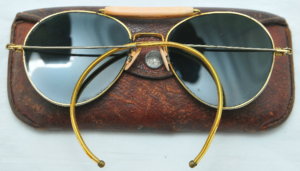