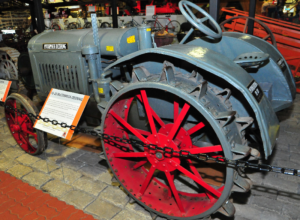 This week’s “Museum Feature of the Week”, is the McCormick-Deering 10-20 Tractor! This 10-20 McCormick-Deering tractor, built in 1927, was designed to pull agricultural machines: plows, harrows, planters, hay-making machines, harvesting machines, manure spreaders, etc. and provide belt power to equipment such as feed grinders, sawing machines and threshing machines. The designation “10-20” means its four cylinder engine could produce 10 horsepower to the drawbar and 20 HP on the belt. It has a four cylinder engine with a 3-speed transmission. 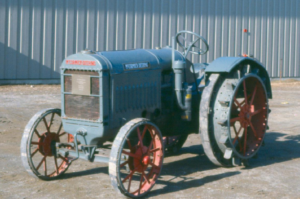 Cyrus Hall McCormick, Jr., (his father invented the mechanical reaper in 1831) and William Deering were key figures in this new company giving rise to the name McCormick-Deering. Their name started appearing on all their farm machinery after the antitrust settlement with the federal government around 1922. Between 1923 and 1939, roughly 215,000 10-20 McCormick-Deering tractors were manufactured.