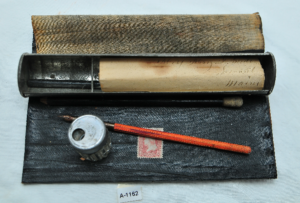 This week’s “Museum Feature of the Week”, is a Portable Writing Case. Cases likes this one were used by Civil War soldiers to write their families, which was a popular pastime for homesick soldiers. The writing case contained an ink well, pen, two pencils, stationery and stamps. When using it, the case would be unrolled and a device on the back would be turned to convert it to a firm writing surface.

This writing case belonged to Richard L. (Lonnie) Beede. He mustered into the 1st Maine Heavy Artillery in November of 1863. Inside the writing case was an envelope that Lonnie had addressed to his mother, Mary Beede, in Levant, Maine, but sadly there was no letter. Pvt. Beede died February 2, 1864 at Fort Sumner after contracting measles.