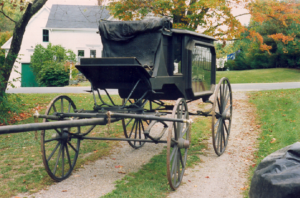 This week’s “Museum Feature of the Week”, is the Morrill Hearse. This hearse was built in 1866 and was specifically designed to accommodate winter burials. By simply removing the wheels, the hearse was equipped with runners for the snow as winter burials in Maine were common. Fires were built over the burial plot to thaw the ground for hand digging. This is one of three hearses that we have in our collection. 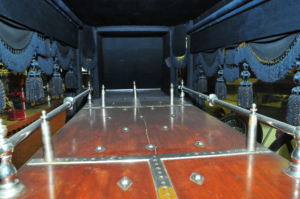 The Morrill Hearse also contains casters on which the coffin would roll easily in and out of the vehicle and pointed devices would be extended to hold it in place during transport. Particularly valuable are the curved glass windows in the rear doors. Visitors often believe the short compartment meant that people were shorter in the past but there is actually an area that extends under the seat allowing for a longer coffin. 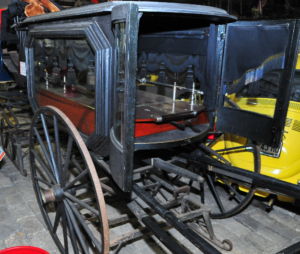